Our core values were laid out for us by Marcellin Champagnat who founded the College's original teaching order, the Marist Brothers. These core values are central to our identity and underpin all that we do here. These are expressed in our five Pillars.

Characterised by simplicity of expression in our relationships, along with humility and modesty

Diligence in all our endeavours with excellence as our goal

IN THE WAY OF MARY

Being a living example of Mary in how we treat others

The mana whenua of this land are Ngāti Wairere and Ngāti Haua, of the powerful Waikato-Tainui tribe. We sit in the heart of the Kingitanga rohe, being the movement to create a unified Māori nation.

The Marist  began their mission among Māori first in the far north of Aotearoa / New Zealand and then spreading south to Wellington and the South Island.

A Marist School for boys opened in Hamilton East in 1922, on the current Marian school site. 40 'Foundation Pupils' in Standards 3-6 were taught by 2 Marist Brothers, Br Calixtus Higgins and Br Remigius Whitaker. This school served the needs of a growing Catholic community in Hamilton and surrounding rural towns, and was extended to be a Secondary School as the pupils grew.  "The train boys usually arrived a little late" and the school included a horse paddock for those who rode.

In the late 1950's it was evident that the Clyde St school was overcrowded, and work began to establish a new College. Our current Hillcrest Rd land was purchased in 1959 from the Sisters of Our Lady of the Missions  (who established Sacred Heart Girls College). Fundraising across the Diocese through local parish committees demonstrated the real desire of our community for their sons to be taught within the Catholic faith and also demonstrated a vast generosity within Catholic families and businesses. The Marist College changed its name to St John's College in 1961, and we opened on our new Hillcrest Rd campus in February 1962.  An initial roll of 240 young men from 3rd form to 7th form were taught by 6 Marist Brothers and 'lay' teachers.

St John the Evangelist is the author of the fourth Holy Gospel and is considered a Patron of Youth. The Eagle has long been a symbol associated with St John. Gold and white were the papal colours of Pope John who was the Pope in 1962 when the College opened. Blue is the colour associated with Mary. 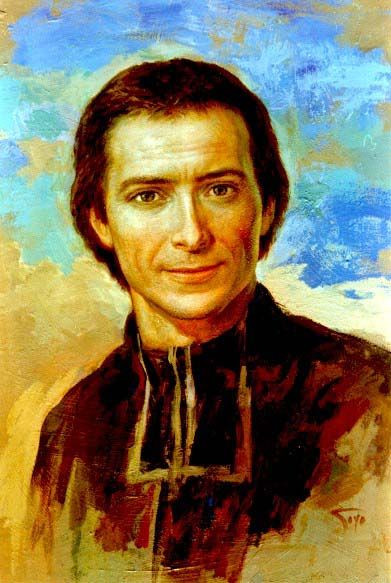 St Marcellin Champagnat founded a worldwide community of Brothers. He followed his calling from God with the simple and ordinary Christian faith in his heart together with hard work. His passion and love of God at once drove and comforted him throughout his life, while allowing him to live surrounded by those who loved him and all they had built together.

The son of French peasants, Marcellin was born in the village of Le Rosey near the city of Lyons in 1789. It was the year of the storming of the Bastille, the start of the French Revolution. The following decades were extremely difficult for the French. It was with this background of religious, political, economic and social unrest that heavily influenced the path to foundation of a religious order and Sainthood that Marcellin’s life led too.

France had been at war almost continuously for 26 years and public education in rural areas had collapsed. This background of no schools or education system lead Marcellin into a life changing event. One day, a young man of the parish called him to the seventeen-year-old boy, Jean-Baptiste Montagne, who was dying. What affected Marcellin so profoundly about this meeting was that Jean-Baptiste had never learned the most basic elements of the Christian faith. To Marcellin, the death of Jean-Baptiste at only 17 and in almost complete ignorance of the Christian faith was a tragedy. He decided he must act to ensure others did not suffer the same fate. This event, more than any other, set Marcellin on the path which would lead him to found the Brothers.

By the time Marcellin died on June 6 1840, the order had 48 establishments in France and 278 Brothers. In 2020 there are 5,100 Brothers working in over 80 countries. From small beginnings Marcellin’s dream grew and its influence spread to every continent in the world. It has reached to millions of students and their families, who proudly proclaim themselves ‘Marists’ or ‘Marist old boys’.

One of the proudest moments for the Brothers and Lay-Marists came in April 1999 when Marcellin was made a Saint (canonised) by Pope John Paul II.